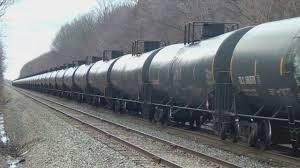 A federal study examining the volatility of Bakken oil is giving North Dakota officials encouragement in their petition to overturn a Washington state law that targets oil train shipments.

A study completed by Sandia National Laboratories concluded this month that “vapor pressure is not a statistically significant factor” in determining the fiery characteristics of oil train crashes.

“The net result is Bakken oil is no different than any other kind of oil with respect to volatility,” Attorney General Wayne Stenehjem said.

Over the past few years as trains carrying Bakken crude have derailed and erupted in fireballs, oil from North Dakota has come under scrutiny for having a high vapor pressure.

Washington state passed a law earlier this year placing a cap on the vapor pressure allowed in oil unloaded from trains. The restriction would limit the ability of refiners there to accept oil from North Dakota.

Speaking at a meeting of the state’s Industrial Commission on Wednesday, Stenehjem said the study “vastly undermines the reasoning behind the state of Washington enacting this statute because they assume without evidence that Bakken oil is more volatile.”

Washington Gov. Jay Inslee’s office said in a statement that the state will defend its law. Officials plan to submit comments to the Pipeline and Hazardous Materials Safety Administration.

“Every governor has a responsibility and a right to protect the health and safety of their communities and environment,” spokeswoman Tara Lee said. “As Washington has experienced an enormous spike in the numbers of oil trains traveling through our state, this legislation is a reasonable approach to anticipated increased volumes of volatile crude oil.”

The study examined oil from the Bakken, the Permian Basin in Texas and crude stored in the federal Strategic Petroleum Reserve, each with a different vapor pressure. Researchers lit pools of oil on fire and created fireballs while measuring the height of flames, burn rate and fireball dimensions, among other factors.

According to the study, “the results from this work do not support creating a distinction for crude oils based on vapor pressure with regards to these combustion events.”

North Dakota Petroleum Council Vice President Kari Cutting said in a statement that the study “conclusively determined” that Bakken crude does not have different physical and flammable characteristics from other crude oil.

“Washington legislators argued their bill was necessary to ensure safe transportation of crude by rail, but this study provides scientific proof that more stringent vapor pressure requirements do not enhance transportation safety and Bakken crude does not require distinct standards to ensure safety,” she said.

More than 160,000 barrels of oil make their way from North Dakota to refineries in Washington by rail each day. That equates to about 11% of North Dakota’s daily oil production.