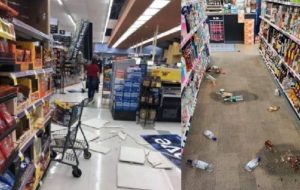 Central Kansas was shaken Friday morning by a 4.2 magnitude earthquake that knocked items from store shelves in Hutchinson. It was followed by a Friday night aftershock that measured 3.0 magnitude.

KWCH TV reported that several Hutchinson businesses had cleanup on their agendas Friday after a 4.2-magnitude earthquake shakes the Reno County community.

At Egbert Liquor, the earthquake was strong enough to shake shelves and send bottles crashing to the ground. The aftermath included wine stains on the carpet.

The Kraft Electric Company was among local businesses to capture the moments the earthquake hit on its cameras.

Over at the Medicine Shoppe, store owner Ricky Stone says his alarm company called, asking if they should send police. The alarms sounded as a result of the earthquake.

Elsewhere in the Hutchinson area, the earthquake raised safety concerns at the salt mine and a gas-storage facility called Yaggy Field.

A big question for many in Hutchinson concerns earthquake insurance and whether or not it will cover damage.

The Insurance Information Institute has a few things it says you should ask yourself before buying a policy. For starters, homeowner’s insurance does not cover damage to things like bricks or sheetrock.

An exception is for homes with a lot of brick. If you’re home is primarily built from brick, it may be worth it for you to get earthquake insurance, experts say.

The damage wasn’t limited to Hutchinson. Burrton Public Schools moved its student body from the high school to the elementary school following Friday-morning’s earthquake because, the district said, there were concerns about damage to the high school and central office.