Governor to take his cabinet on a tour of the state 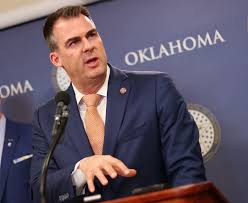 Oklahoma Gov. Kevin Stitt calls it his Top Ten cabinet tour–a chance for Oklahomans to tell the state’s leaders about issues they want the government to focus on, whether it be energy, agriculture, transportation or more.

He plans to hold four public meetings in the closing months of 2019 and said there will be more to come in the future years of his administration.

At the Top Ten cabinet tour, the governor and cabinet members will discuss progress being made in the Stitt administration, followed by a listening session for Oklahomans to share with the governor and his cabinet about issues they want to see state government address.

Ken Wagner, Secretary of Energy and Environment will be part of the tour.

The first Top Ten cabinet event will take place on July 31 at the High Plains Technology Center in Woodward, Oklahoma. Doors will open at 11:00 a.m., and the program will begin promptly at 11:30 a.m. with a presentation from Governor Stitt and select members of the cabinet, followed by a reception where Oklahomans can speak one-on-one with the governor or members of the cabinet.

“My administration is committed to working with the people of Oklahoma to deliver a Top Ten state, which is why we are taking our cabinet meeting on the road to share about our progress and to listen to citizens,” said Governor Kevin Stitt. “As part of the public meeting, we will share about our progress in delivering government accountability, recruiting new jobs to diversify our economy, and generating innovative solutions to address access to healthcare and a quality public education. We will also spend time hearing from you, touring your community, and meeting with local leaders as we work together to ensure success for all 4 million Oklahomans.”

Following the conclusion of the public meeting, Governor Stitt and cabinet members will be participating in several site visits in the community, to include the WS Key Correctional Center, CF Industries Fertilizer Plant Tour, the Woodward Arts Center and more.