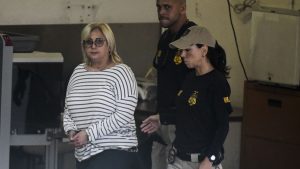 A month after it was revealed the FBI was investigating alleged corruption in the government of Puerto Rico, six arrests were made but none involved an Oklahoma company that won nearly $1 billion in power restoration contracts with the government.

The six arrests, which included Puerto Rico’s former education secretary, focused on how the suspects steered federal funds to unqualified, politically connected contractors in the area of education, not power restoration. None of those arrested had any connections to Oklahoma City-based Mammoth Energy Services and its subsidiary Cobra.

Mammoth and Cobra were mentioned in early June as targets of an investigation by the FBI and the Department of Homeland Security’s Inspector General.  Mammoth publicly defended the contracts it obtained to restore power to the hurricane-damaged country. The probes focused on how Mammoth dominated the power restoration efforts after the  2017 hurricane.

“Mammoth stands by the quality and reasonableness of its work and welcomes an open inquiry into its performance,” stated the company when word was revealed in June of the ongoing probes.

Mammoth ended up getting nearly $1 billion in contracts following the hurricane that left Puerto Rico without electrical power.

“It was alleged that the defendants engaged in a public corruption campaign and profited at the expense of the Puerto Rican citizens and students,” Neil Sanchez, the special agent in charge of the U.S. Department of Education Office of Inspector General’s Southern Region, said in a Wednesday news conference. “This type of corruption is particularly egregious because it not only victimizes taxpayers, it victimizes those citizens and students that are in need of educational assistance.”

The alleged fraud involved $15.5 million in federal money spent between 2017 and 2019. Keleher’s education department spent around $13 million during her two years as secretary. Another $2.5 million was spent by the insurance administration when Ávila-Marrero led the agency.

Officials said Velázques Piñol illegally used federal money to pay for lobbying, and improperly used contacts in the education and health insurance agencies to win contracts. Ponce-Mendoza worked as Keleher’s assistant; both her and her sister were friends with the former secretary.

Keleher is accused of steering contracts toward her friends without going through regular procedures.