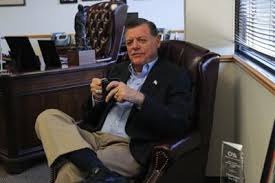 Regardless of political points of view, most Americans can agree that good stewardship of the earth and its precious resources is important. And I am always encouraged by the special efforts made by individuals, families and communities to do their part today to ensure a fruitful and beautiful world for generations to come.

Certainly, there is an abundance of ideas about how we can take better care of the environment. Unfortunately, some of the latest proposals making headlines are unrealistic. Most egregious, Democrats in both chambers this year rolled out their so-called “Green New Deal,” which is really socialism masking as environmentalism.

According to the Environmental Protection Agency (EPA), America was responsible for 15 percent of global greenhouse gas emissions in 2014. In order to further reduce emissions, the radical Green New Deal calls for complete elimination of fossil fuels from the nation’s energy portfolio in 10 years or less – an unreasonable mandate that would be detrimental to local and state economies. In Oklahoma, where oil and natural gas production has shaped our economy since shortly before statehood, the impact of such a requirement would indeed be severe.

Beyond the ban of fossil fuels, transportation and infrastructure as we know it would be completely uprooted. Air travel would be shut down. All cars would have to be electric. Americans would be pushed to rely on a yet-to-be-built highspeed rail system for getting around. Moreover, nearly every single building in the United States would need to be modified to comply with the new energy standards demanded by the Green New Deal. And although nuclear energy does not emit carbon dioxide, the Democrats’ radical plan would still require phasing it out in 10 years or less.

For reference, fossil fuels and nuclear account for 80 percent of our nation’s energy portfolio. While I am certainly supportive of continuing to explore promising alternatives and I applaud innovative research in the industry, no known sources have proven efficient enough yet to power everything effectively. Therefore, forcing such drastic changes rather than taking incremental steps would cause much more disruption and harm than good.

Even though the plan was presented as the means to save the earth from destruction, only a small part of the plan addresses environmental policy. In fact, much of the proposal’s cost would go toward purely socialist policy. For example, according to the official FAQ sheet issued by the bill’s authors, the Green New Deal would grant a federal job guarantee and “economic security for all who are unable or unwilling to work.” Moreover, all Americans would be forced onto one-size-fits-all, government-run healthcare.

Not surprisingly, the Green New Deal comes with an astronomical price tag. According to analysis by the American Action Forum (AAF), the plan could cost up to $93 trillion over 10 years, and the burden would be harshly felt by hardworking American taxpayers. To come anywhere close to covering the cost, the tax responsibility for the average American household would have to be at least $60,000 per year, which is just under the annual median income nationwide. If you add the cost of the Green New Deal to the current 10-year projection of $58 trillion for all federal spending, it would nearly triple the government’s spending commitments. If not covered by taxpayer dollars, the massive bill would simply be added to the nation’s already daunting $22 trillion of national debt.

While I am always willing to work with my colleagues on both sides of the aisle to find commonsense solutions for any issue, the Green New Deal is nonsensical, unworkable and simply a departure from reality. In fact, not a single Democrat voted in favor of it when it was put on the floor of the Senate. Moreover, the Democratic-controlled House hasn’t even scheduled a vote on it. Perhaps a sign that even Democrats know the Green New Deal is too extreme.