Another large producer in western Oklahoma 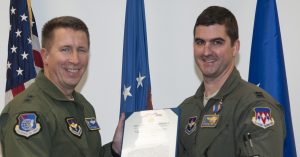 We do a lot of stories how the energy industry impacts the military in Oklahoma, such as wind farm development around Air Force bases.  Rarely do we do stories about the individuals at the military installations, until now.

Capt. Matthew Heath, a T-38 instructor pilot posted at Vance Air Force Base in Enid is being honored for saving lives during a 2017 incident in Amarillo, Texas.

He was guiding a student during a T-38 landing in Amarillo, Texas, on Nov. 18, 2017, when the Talon suddenly lost thrust in both engines.

“When I saw the student move the throttle and nothing happened … it was definitely nerve wracking to say the least,” Heath told The Telegraph of Macon, Georgia.

Heath, who is assigned to the the 71st Flying Training Wing at Vance Air Force Base, Oklahoma, took the controls and managed to guide the aircraft to a safe landing, saving the lives of himself and his student, and also saving the $8.2 million aircraft.

Gen. Dave Goldfein has presented Heath with the Koren Kolligian Jr. Trophy at the Pentagon, according to the Air Force Safety Center.

The trophy, awarded annually to one airman by the chief of staff, recognizes outstanding feats of airmanship by aircrew members who — by extraordinary skill, exceptional alertness, ingenuity or proficiency — averted accidents or minimized the seriousness of the accidents in terms of injury, loss of life, aircraft damage or property damage, according to the Safety Center website.

This trophy memorializes 1st Lt. Koren Kolligian Jr., an Air Force pilot declared missing in the line of duty when his T-33 aircraft disappeared off the California coast on Sep. 14, 1955.

Heath, chief of training for the 25th Flying Training Squadron, previously accepted the Outstanding Airmanship Award from Air Education and Training Command’s director of safety, according to The Telegraph.