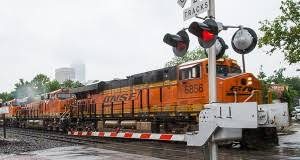 The Oklahoma Corporation Commission meets Thursday to consider rules to enforce a new law regarding trains that block street intersections.

The rules are to be part of a new law which allows penalties up to $1,000, even though the Corporation Commission staff preferred a $500 penalty. House Bill 2472 was signed into law last month by Gov. Kevin Stitt.

The issue is on the Commission’s regular meeting and its daily signing agenda docket. The meeting starts at 9:30 a.m. in Room 301 of the Jim Thorpe Office building, 2101 North Lincoln Boulevard in Oklahoma City.