Adjustments made at Pioneer Natural Resources 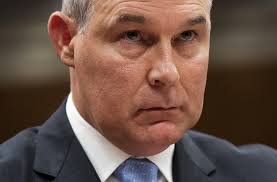 The Inspector General of the Environmental Protection Agency is giving a clean bill of health to how a 2017 Superfund Task force created by former EPA Administrator Scott Pruitt performed its duties. And a new report downplays concerns of environmentalists that Pruitt would play politics with Superfund sites.

“The EPA complied with applicable laws and rules,” stated the IG report released this week.  Pruitt, the former Oklahoma Attorney General created the task force in May of 2017 and charged it with providing recommendations within 30 days for improving and expediting Superfund site cleanups.

While Pruitt was accused during his tenure as Administrator of being too politically friendly with the oil and gas industry, the IG report found no such indications in the Task Force program.

“However, the EPA report could have been more transport with the process that was used, and the qualifications of the personnel involved, to allay public concerns and increase confidence in the recommendations,” added the IG.

The report also found that most task force members noted the goals were focused on “economic issues associated with site cleanup and reutilization”  but “the Superfund program’s responsibility to protect human health and the environment did not change.”

“We heard positive feedback from task force members, such as it was a collaborative process or a helpful effort,” continued the report.

As the IG pointed out, some environmental groups “expressed concerns that actions by the now former EPA Administrator  reversed or weakened regulatory programs, which may have further created concerns that the Superfund program was also targeted for similar program dismantling.”