Oil is expected to be flowing this week through the Plains All-American Pipeline from the Permian Basin to the Corpus Christi refineries and storage areas.

The Cactus II oil pipeline has a capacity of 670,000 barrels a day. The company plans to begin the process called “line fill” in which the pipeline is filled with oil before the start of any commercial deliveries.

The pipeline operator said this month the Cactus II project is progressing on schedule for initial service by the end of the third quarter of 2019.

“We have over 90% of the pipe in the ground and we’re working diligently toward completion,” a company executive said during its investor day about two weeks ago. 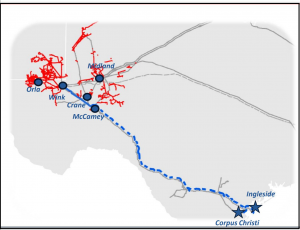 Once line fill is complete, commodities merchant Trafigura, one of the largest shippers on the line, will be shipping full contractual volumes, the source said.

Trafigura signed a long-term agreement with Plains last year to transport a total of 300,000 bpd of crude and condensate on the Cactus II pipeline from the Permian basin, the biggest oilfield in the U.S., to the port of Corpus Christi.

Other shippers on the Cactus II line include Concho Resources Inc and Anadarko Petroleum Corp , according to the companies.

Two other pipelines are also on track to begin service this year to transport Permian crude to the Gulf Coast.