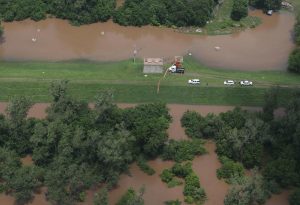 Some of those in Oklahoma’s congressional delegation are asking the federal government to carry out a study of the flood levees in Tulsa following the deadly and devastating floods that hit the Arkansas River in May.

Sens. James Lankford and Jim Inhofe along with Rep. Kevin Hern of Tulsa made the request of the U.S. Army Corps of Engineers. They are asking the Corps to do the study this year, calling it a key first step in modernizing the aging levee system.

The three also want immediate implementation of critical improvements following the conclusion of the study. 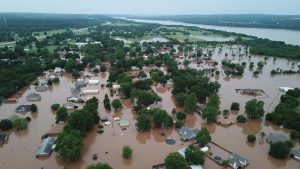 The letter is available here and pasted below.

We write urging that the U.S. Army Corps of Engineers (USACE) take all appropriate measures to complete the Tulsa West Tulsa Levee System Feasibility Study before the end of this calendar year to ensure necessary upgrades to the system can be included in the President’s Fiscal Year 2021 budget request to Congress early next year. Further, we urge the immediate implementation of the critical improvements to the levee system upon the conclusion of the study.

The recent, devastating flooding along the Arkansas River made clear how dependent much of Tulsa County’s critical infrastructure is on a 75 year old levee system. Moreover, this most recent flood event lasted more than seven days, putting incredible strain on the aging levee system. More than ten years ago, the U.S. Army Corps rated the Tulsa West Tulsa levees as “unacceptable”, making clear the need and urgency for modernization and upgrades. Without improvement, it is unclear how much longer the levee system can continue to provide critical protection to the Tulsa County community.

The ongoing Feasibility Study must be completed so structural improvements to the system critical to reducing the risk of failure during future flood events can be completed. The improvements should utilize current, state-of-art techniques wherever feasible to minimize future risks to life and property and to reduce future maintenance requirements associated with older techniques utilized in the existing levees.

The Tulsa West Tulsa Levee System protects thousands of Oklahomans and more than $2 billion in public and private infrastructure. Finalizing the Feasibility Study before the end of this calendar year would enable the necessary upgrades to be included in next year’s budget process—ensuring the levee system can continue to protect Oklahomans for another 75 years.