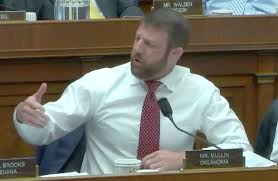 Oklahoma Congressman Markwayne Mullin and others on a subcommittee of the U.S. House Energy and Commerce committee will hear Tuesday from former administrators of the Environmental Protection Agency.

The Oversight and Investigations subcommittee plans the hearing entitled “Critical Mission: Former Administrators Address the Direction of the EPA.”

The hearing will focus on how Democratic leadership disagrees with the direction taken by the EPA in the Trump administration.

“In addition to raising these issues in the April letter, key areas of environmental concern have been raised by some former EPA Administrators, including the Agency’s disregard for
science-driven policy; the lack of U.S. international leadership on addressing climate change; EPA’s roll backs of key public health and environmental protections; and proposed reductions to EPA’s budget.”

The former administrators who will testify include: