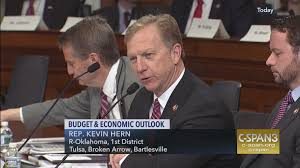 Oklahoma Republican congressman Kevin Hern made it clear to Democrats on Tuesday, their Green New Deal would be “devastating” to Oklahoma.

in Oklahoma and generates more than $50 billion annually. It’s the largest source of tax revenue for the state government, contributing more than $2 billion in taxes, much of which goes directly to education and infrastructure.

Kentucky Rep. John Yarmuth, the Democrat who chairs the House Budget Committee said the hearing was held “covering a topic that we cannot afford to ignore.”

He called it a hearing on the future of the country

” Americans are already feeling the effects of climate change. Homes have been blown away in hurricanes that are increasing in intensity or lost to wildfires that are spreading farther and taking longer to extinguish. Our farmers have endured prolonged droughts, while some states have experienced historic flooding,” said Yarmuth in his opening statement.