Oil and gas rig counts dropped nationally and in Oklahoma

In partnership with the Oklahoma Department of Wildlife Conservation, the Cleveland County Rural Water District #1 has completed drilling three water wells on Lexington Wildlife Management Area and has started providing safe drinking water to about 125 customers in the area.

The water district’s first billing was set to occur this week, culminating a 16-year effort to provide quality water to southern Cleveland County residents who have been plagued with groundwater contamination and depletion issues for decades.

In a message to Wildlife Department Director J.D. Strong, water district Chairman Rich Murnan said residents and the City of Lexington are making connections to the system.

“I wanted to thank you for your guidance and support while you were with the OWRB,” Murnan wrote. “Those meetings we had … took us through some very difficult times in our attempts to make this water system actually happen.”

Before becoming ODWC’s Director in 2016, Strong was executive director of the Oklahoma Water Resources Board from 2010-16.

“I’m very pleased that the Wildlife Department could step up and help these residents in southern Cleveland County with such an important resource,” Strong said. “This water partnership is a great example of how Oklahoma’s public lands, in this case the Lexington Wildlife Management Area, can serve the public good in more ways than just hunting, fishing and outdoor recreation.”

Murnan said the water district was formed in 2003 by local landowners facing water woes, including some who were forced to haul drinking water to their homes and others whose wells were underproducing. 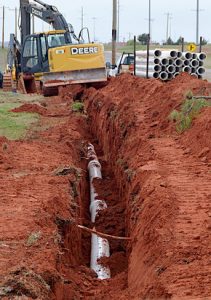 The district sought new sources of water for years, none of which proved feasible due to high cost or inadequate water reserves. However, the City of Purcell has operated water wells on Lexington WMA for several decades, so the Cleveland County district decided to pursue the possibility of doing the same. Federal grants were secured to fund 45 percent of the project, and legislation was changed to allow the Wildlife Department to enter into longer-term easement agreements as required by federal rules.

Construction of wells and pipelines began in February 2017 and lasted a year. Finally, last month, the district received permission from the state to begin operating as a water supplier. Murnan said the water quality has proved excellent, and he’s hopeful that in addition to meeting residential needs, the district will boost economic development in the area.

“I look forward to again working with you and members of your staff – Wildlife Lands and Minerals Coordinator Kristen Gillman and Wildlife Biologist for the Lexington WMA Joseph Nabonne. My hope is for a productive partnership with ODWC as we bring a much-needed resource to rural residents in southern Cleveland County as well as the City of Lexington,” Murnan wrote.