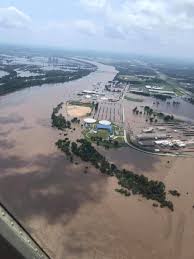 A state of emergency remains in effect for all 77 counties in Oklahoma because of the flooding, severe storms and tornadoes.

According to the Oklahoma State Department of Health, 118 injuries have been reported by area hospitals.

Oklahoma Housing Finance Agency has Emergency Housing Assistance available to Oklahoma families displaced by recent storms where their home has been left uninhabitable. OHFA provides grants of up to $1,500 for temporary hotel accommodations and/or security or utility deposits for more permanent housing. To apply for assistance, call (405) 419-8196 to leave a message on OHFA’s housing hotline for the disaster housing grant. Visit http://tinyurl.com/ohfahelp for updates and information on how you can meet with an OHFA representative for application assistance.

From now until June 14, 2019, several relief agencies are staffing a free hotline for muck-out, debris removal, and home cleanup from the recent statewide storms and flooding. This hotline will connect survivors with reputable and vetted relief agencies that will assist in debris cleanup and mucking out, as they are able. All services are free, but service is not guaranteed due to the expected overwhelming need. The public may call 800-451-1954 to request help with storm and flooding related cleanup. Those requests will be shared with relief organizations at crisiscleanup.org.

Hay donations are needed to assist Oklahoma farmers and ranchers after the recent statewide flooding disaster. These donations are currently being accepted at the Muskogee Fairgrounds, located at 1444 S Cherokee St. in Muskogee. For questions or more information, please contact Rowdy Fewel at 918-261-6800.

A flood relief fund has been set up through the Oklahoma Cattlemen’s Foundation for Oklahoma Cattlemen affected by the ongoing flooding across the state. One hundred percent of the donated funds will be distributed to the affected cattlemen. Donate at https://www.okcattlemen.org/flood-relief-fund.

A Regional Coordination Center has been activated in Pittsburg County to support flooding in McIntosh, Haskell, and Le Flore Counties. Choctaw Nation has provided a sandbagging machine, Oklahoma Department of Wildlife Conservation has provided game wardens and boats, and Rober S. Kerr powerhouse has provided 1,000 sandbags.

El Reno Emergency Management reports all residents have been placed in a hotel or apartment with one month rent and utilities taken care of. The distribution center for victims is located at the VFW, 1515 S. Rock Island Ave., El Reno. The site will close on Friday, May 31. Red Cross is providing cleanup kits and relief supplies, and is also doing casework with families.

Le Flore County Emergency Management reports voluntary evacuations are in place for campgrounds and RV parks along the Arkansas River.

Muskogee County Emergency Management reports numerous county roads are closed in areas along and near the Arkansas River. Voluntary evacuations are ongoing in Braggs, and the Oklahoma National Guard performed air evacuations for the town last Friday. Swift water rescue teams from Sequoyah County and Cherokee National Marshals are assisting with water rescues. Webbers Falls remains under a mandatory evacuation order and parts of Ft. Gibson are under a voluntary evacuation order. Oklahoma Highway Patrol, Cherokee Nation, and local fire departments have teams in place for water rescues if needed. A road has been built between Muskogee and Braggs to allow emergency vehicles access to residents until waters recede. Supplies are being sent into Braggs via rail car. The Oklahoma Incident Management Team has been providing support in Muskogee since Monday. 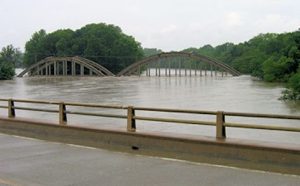 Rogers County Emergency Management reports a voluntary evacuation for low lying areas along and near the Verdigris River in Rogers County. The Guymon swift water rescue taskforce is responding to water rescue missions as needed.

Sequoyah County Emergency Management reports flooding is extensive in Moffett, which is now completely evacuated. Water and power are out in Moffett, but operational across the rest of the county. Some roads are closed in low-lying areas.

Wagoner County Emergency Management reports a voluntary evacuation order remains in place for all low-lying areas near the Arkansas and Verdigris Rivers. Verdigris River levels are rising and flooding impacts are expected in communities including Oak Grove, Okay, and Wybark. Evacuees can shelter at Coweta High School. Calera Fire Swift Water Team is on site to assist as needed. Two Oklahoma National Guard personnel are at the county fairgrounds to lift sandbags into resident vehicles.

Oklahoma Highway Patrol Marine Enforcement Division is supporting the refueling of tugboats at the Port of Muskogee. Troopers continue to assist with road closings along the river systems in eastern Oklahoma.

They continue to discourage travel in flood-impacted parts of the state. 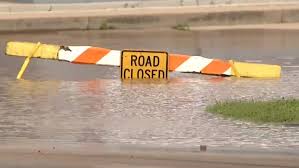 The following highways are closed until further notice due to flooding:

For official information about highway closures due to flooding, the Oklahoma Department of Transportation posts updates in the Traffic Advisory section of www.odot.org. An interactive map showing highway conditions and closures can be found at www.okroads.org.

The state’s price gouging statute is in effect for all 77 Oklahoma counties. The Emergency Price Stabilization Act prohibits an increase of more than 10% for the price of goods and services after a declared emergency. The statute triggers automatically after the governor issues a state of emergency. The law allows the attorney general to pursue charges against individuals or businesses that engage in price gouging.