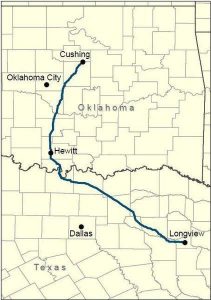 Plains All American Pipeline announced a $128 million expansion and new joint venture of its existing Red River Pipeline system that carries oil out of Cushing south into Texas.

Delek Logistics Partners, LP has purchased from a Plains’ subsidiary a 33% ownership interest in a new Red River Pipeline Company LLC joint venture for $128 million. Plains retained a 67% interest in the joint venture and will continue to operate the Red River system.

In support of this expansion, Delek US increased its long-term throughput and deficiency agreement on the Red River system from an existing 35,000 barrels per day to 100,000 barrels per day. The expansion enables additional volume pull-through from Cushing and the Permian to the U.S. Gulf Coast markets, providing additional supply options for shippers.

“This is a win-win deal that fits our strategy of optimizing and expanding existing systems while exercising capital discipline,” stated Jeremy Goebel, Executive Vice President – Commercial, Plains All American. “This transaction expands long-term alignment with a natural shipper, supports and funds the expansion of the system, increases Plains’ net committed annual cash flow, and provides proceeds to fund our capital program or lower debt.”

The Red River pipeline system extends from Cushing, Oklahoma to Longview, Texas. The expansion will increase the total system capacity from approximately 150,000 barrels per day to approximately 235,000 barrels per day through the addition of pumping capacity and is expected to be completed during the first half of 2020. Approximately 30% of the expanded Red River system capacity from Cushing to Hewitt, Oklahoma is owned by a third party in an undivided joint interest structure.