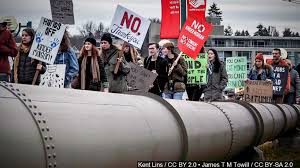 The House and Senate approved HB3557 over the weekend. It targets both individuals and corporations including non-profit groups that might be involved in protests against pipelines. Corporate punishment could be a fine of up to $500,000 plus restitution.

The bill is similar to one signed into law in Oklahoma a few years ago. Gov. Mary Fallin signed the measure in the spring of 2017. But it is more of a felony trespassing law that carries a $10,000 fine. Those convicted of damaging an energy-related infrastructure could be fined $100,000 and face 10 years in prison.

The Texas bill would create law that would be applicable to both individuals and corporations, which could include non-profit organizations that might be involved in protests against pipelines, with corporate punishment by fine of up to $500,000 plus restitution. 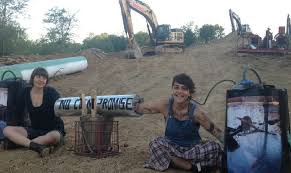 A conference committee changed one penalty from the Senate version of the bill, returning from a Class A misdemeanor to a Class C felony the actual impairment of infrastructure — and the conference committee report added language that makes it a defense for prosecution if the damage that was done was only “superficial,” so as Paddie explained, if “folks stuck a sticker on a pipeline or painted it…there is a defense” against prosecution.

Under House floor questioning on Saturday by Rep. Erin Zwiener (who framed the bill as a possible “hammer against landowners and peaceful protesters” who could be charged under the bill and receive punishment equal to that of felony child endangerment and kidnapping), Rep. Chris Paddie noted that use of the term “destroyed” in the bill is a major point in the bill, as opposed to “deface” — but the language of the bill adds one defense to prosecution which is “superficial damage,” under which defacing property may be included.

Infrastructure can be rendered inoperable — damaged — but not be “destroyed,” it was pointed out, and such structures could be damaged to a state in which they are a threat to people or the environment, such as damage that does not destroy but does cause a leak, for instance, in a pipeline.

Such damage is intended to be covered by the bill, Rep. Paddie said, and pointed out that the punishments meted out by the bill are “ceilings, not floors,” with much discretion left to prosecutors for lower fines and jail time for lesser offenses.