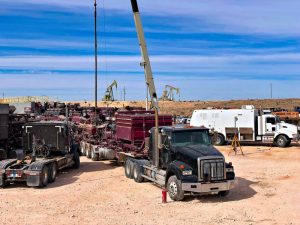 A trucking company with operations in the heart of the Permian Basin in West Texas is shutting down and no one is explaining why.

Product and Logistics Services LL, a subsidiary of Schlumberger filed notice with the Texas Workforce Commission that it was closing operations in Monahans, Texas. The shutdown means the loss of 124 jobs.

Monahans is 35 miles west of Odessa.

The closure is expected to be permanent, according to the WARN letter sent by P&LS to the Texas Workforce Commission last week. Layoffs will take place between July 6 and July 19, the letter said, according to a report by FreightWaves.com

There are signs of a slowdown in drilling activity. The Baker Hughes rig count for the Permian Basin was most recent at 457 after being up to 493 in November 2018. It’s down slightly from a year ago. The chart below from SONAR shows the pace of new drilling applications in the state of Texas.