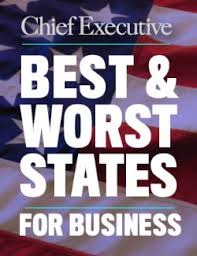 A new ranking of the best and worst states for business in 2019 by Chief Executive Magazine shows Oklahoma moved up three places to 18th best.

Texas remains number one for a second straight year while California is at the bottom of the list for a second consecutive year.

Chief Executive credited Oklahoma stating that its economy “is slowly rebounding with new investments in several sectors and a state initiative to better align resources, education and training with workforce needs.”

The magazine cited Amazon’s plans to open a new fulfillment center in Tulsa and Google’s intentions to expand its data center in Pryor. And it hailed recent groundbreaking by an Italian company, Sofidel Group, on a $360 million plant to support 300 jobs.

According to the CEOs who were surveyed for the 2019 Best States & Worst States for business ranking by Chief Executive, Texas remained No. 1 this year, solidifying its long hold on the top spot. Florida once again was No. 2. Indiana remained No. 5. At least Tennessee leapt up to No. 3 while North Carolina dipped one spot, to No. 4.