May proves even more deadly for tornadoes and flooding in Oklahoma 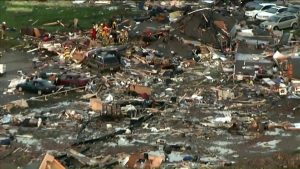 The month of May turned even more deadly over the weekend when a tornado hit El Reno, killing two residents of a mobile home park and injuring others when a motel along I-40 was destroyed.

The deaths occurred in the Skyview Mobile home parking situated along Route 66 and immediately east of highway 81. The tornado appeared to take a glancing blow to the park destroying a handful of homes. 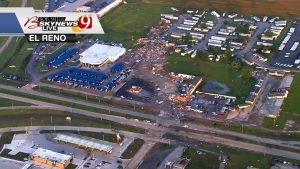 Immediately to the southwest of the mobile home park sat the American Budget Value Inn which took a direct hit, leaving stunned and bloodied customers crawling to free over piles of  debris and smashed cars and motorcycles. No one was killed in the motel. 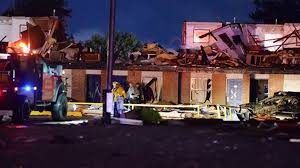 The storm hit around 10:35 in the evening as a massive line of thunderstorms had moved from western Oklahoma to the east. The line of storms had produced numerous other short-lived tornadoes.

At the time the El Reno tornado struck, anther tornado was approaching the community of Bridge Creek in Grady County to the south. But it too was short-lived and did not produced the kind of damage as the tornado in El Reno.

El Reno has experienced a long history of deadly tornadoes. The deadliest was in 2013 when an EF3 tornado was described as the widest in recorded history….an estimated 2.6 miles. It traveled about 8 miles southwest of El Reno and had winds of 301 mph.

It is best known for killing four storm chasers as the tornado crossed I-40 and eventually destroyed much of the Canadian Valley Vocational-Technical school along old Route 66.