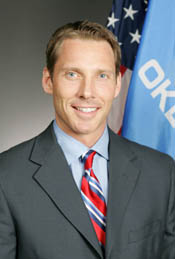 A filing with the Securities and Exchange Commission by OGE Energy Corp. shows a transfer of shares to a new company officer.

The May 24 filing reflected the acquisition of 599 shares in the company were made by Kenneth Adams Miller. He is a Vice President of State Regulatory and Legislative Affairs for OGE.

The acquisition leaves him with 2,961 shares in the company. Miller went to work for OGE after resigning in January as Oklahoma Treasurer. He served in the State House beginning in 2004 then won election as treasurer in November 2010.

He chose not to seek re-election last year.