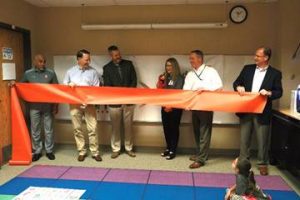 After the installation was revealed during a school assembly, pre-K and kindergarten students explored the new technologies. The young learners worked with Snap Circuits, Ozobot, Kid Spark Education – ROK Blocks Mobile STEM Lab, Lego We Do 2.0 and Coding Express and Bee Bots.

“Hands-on learning is fun for students and has numerous educational benefits, such as increased retention rates and better problem-solving skills,” said Burcham Elementary School Principal Marla Pankratz. “We’re grateful for the Ripken Foundation and Devon for giving our students the gift of technology. This early exposure will benefit them for the rest of their lives.” 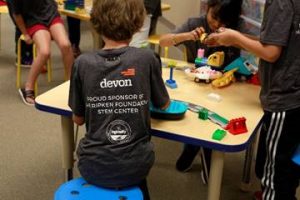 The Ripken Foundation launched its STEM initiative with the goal to inspire and increase the number of minority and at-risk youth pursuing science, technology, engineering, and math careers by providing interactive afterschool lessons without the pressure of grades.

“The same life-lessons that can be learned from sports like teamwork, respect, and resilience, are just as important in the classroom as they are on the field,” Salem said. “We’re proud to be able to give young minds some of the hands-on exploratory learning tools they’ll need to explore different fields of scientific standards to achieve their full potential. Thank you to Devon Energy for their support in this initiative.”

The new STEM Center is the first of several that will be opened in partnership between The Ripken Foundation and Devon.

Allen Wright, vice president of public and government affairs at Devon, said the company is committed to providing resources and materials for initiatives that encourage our children’s imagination and invites everyone to take part.

“It’s remarkable to see such young students learning computer coding and working as a team to complete a project,” Wright said. “Devon wants to inspire the next generation of STEM leaders by giving them the tools they need to express their creativity and hone their technological skills.”

Since 2016, the Ripken Foundation has opened 15 STEM Technology Centers throughout the country, impacting more than 12,000 children.