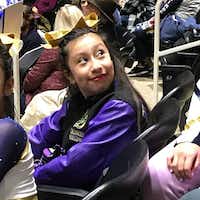 The family of a 12 year old Dallas girl killed last year in a natural gas explosion at her home has settled a lawsuit with Atmos Energy.
Details of the settlement were not revealed in the lawsuit brought by the parents of Linda “Michellita” Rogers who was killed the morning of Feb. 23, 2018.
The blast had cut her aorta and severely damaged her organs and she was pronounced dead at Children’s Medical Center in Dallas.

Atmos evacuated the neighborhood and shut off its gas in the days that followed, displacing about 2,800 residents as crews worked for more than three weeks to replace the steel pipes. But internal emails obtained by The Dallas Morning News showed that the company had workers investigating and repairing gas leaks directly behind Michellita’s home the night before the blast.

The company did not evacuate residents or shut off its gas lines at that time, but an employee told the Texas Railroad Commission, the agency responsible for overseeing gas pipeline safety, that “crews are continuing to monitor the surrounding area for potential leaks.”

A report by the National Transportation Safety Board found later that Atmos was aware of gas leaks in the neighborhood on Jan. 1, 2018, nearly two months before the deadly explosion.