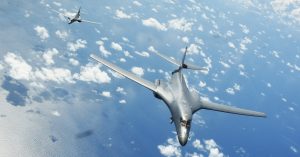 The B-1B Lancer bombers should be flying in and out of Tinker Air Force base again after being grounded for the past month because of concerns over the plane’s ejection seats.

The entire fleet had been grounded by Gen. Timothy Ray, who is commander of the Global Strike Command in late March. Concerns focused on the drogue chute system which corrects the seat’s angle to allow an airman to safely eject from the bomber.

The issue was discovered during routine inspection of the system.

The command said B-1Bs will be returned to flight status individually as inspections and maintenance are finished on the planes.

A report in the Air Force Times quoted Global Strike command as indicating there will be a “staggered return to flight” as more of the bombers are inspected.

During a discussion with reporters last week, Gen. Ray said he was alarmed by what he had seen of the drogue chute configurations, and he quickly reached out to the bombers’ crews.

“My immediate concern was for the safety of the crews,” Ray said. “I reached out to them directly through command channels and … emails … and said basically, ‘I don’t care how bad the readiness is, your personal safeties are more important.’”

Ray said a typical B-1B took between seven to 10 days to thoroughly inspect the egress system. Dyess was able to inspect three airplanes a week, and Ellsworth could inspect two a week, Ray said.