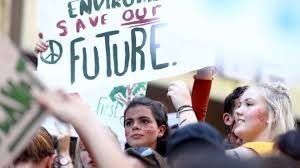 Students in Oklahoma are expected to join a nationwide climate change strike on Friday May 3.

Organizers say it’s in protest of the government failure to take action to stop climate change. The Oklahoma  effort is led by a group called Youth Climate Strike Oklahoma and it intends to hold a rally in front of the Oklahoma City hall beginning at 10:30 a.m.

Youth Climate Strike is sponsored by the Oklahoma Chapter of the Sierra Club. In announcing the strike, Youth Climate said it was joining the effort to demand change.

“Political leaders in Oklahoma and around the world have failed to prioritize — and in some cases even acknowledge — climate change.,” the group said in its announcement. “Their delay had brought about a climate crisis: According to the UN, there are only 11 years left to reverse the worst effects of climate change. Our futures are on the line, and we will demand attention for climate change before it’s too late.”

The group also issued three demands including the enactment of radical legislation to combat climate change on local and state levels in Oklahoma. The second demand was the adoption of the Green New Deal “through a fair and just transition for all communities and workers.”

The third demand was a declaration that “the climate crisis is a national emergency.”