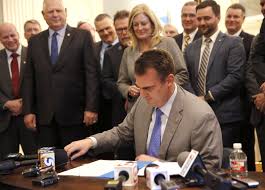 The environmental “self audit” bill supported by Oklahoma’s oil and gas industry was signed into law on Monday by Gov. Kevin Stitt.

SB1003 allows oil and gas firms, chemical plants and utilities to carry out environmental “self audits,” similar to a law that has existed for many years in Texas.

A check of the legislature’s bill status show Gov. Stitt had approved the measure.

Journalists opposed the measure because the “self audit” reports will not be considered public records, allowing industries to withhold information about chemical spills and how they are being cleaned up.

The Governor vetoed three other bills on Monday, according to the McCarville Report.