While oil prices are lower, Continental Resources reports big increase in crude production from a year ago 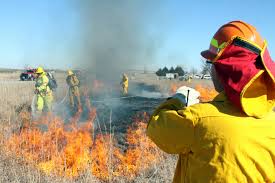 A bill signed into law by Gov. Kevin Stitt will allow retired paid firefighters to return to service as volunteers without affecting their state pensions.

Many of those volunteers are workers in Oklahoma’s energy industry.

House Bill 2051, authored by House Majority Leader Mike Sanders, R-Kingfisher, and Sen. Casey Murdock, R-Felt, passed unanimously in both the House and Senate. The new law will allow retired paid firefighters to perform as volunteer firefighters for a volunteer department without it affecting their current retirement benefit but also without it counting as an accrued retirement benefit against the state’s pension plan.

“Our rural residents and communities are dependent upon the services of volunteer firefighters to keep them safe from harm in the event of deadly wildfires,” Sanders said. “It helps so much to have individuals who are already trained and well-seasoned to perform these duties. This is why I worked so hard to ensure that we can build the ranks of volunteer firefighters without adding the state’s pension costs.”

Murdock said, “With the amount of wildfires we have in Northwest Oklahoma we need all the men and women we can get. The rural fire departments are stretched to the limits. The passage of this bill will allow experienced retired firefighters to join volunteer departments bringing their wealth of knowledge to that team.”

HB 2051 bill amends language to legislation previously passed by Sanders and signed into law that eliminated the 45-year-old age limit for new firefighters by giving them the ability to join a department without the requirement that they be added to the state’s pension plan. The legislation, which took effect in November 2015, has resulted in 300 new volunteer firefighters joining rural fire departments over the past 3 ½ years.

Sanders explained that state law previously prohibited willing volunteers over the age of 45 from becoming firefighters because the state’s pension and retirement plan could not afford them. Many people from his district, however, said they would be willing to serve without needing the retirement benefit. This amendment now will allow retired paid firefighters to participate in protecting the states rural fire districts as volunteers without affecting funding that can now be appropriated to other core government services.

Sanders said about 85 percent of the firefighters in Oklahoma are volunteers. Of the state’s more than 900 fire departments, about 95 percent are certified with the Rural Fire Defense Program.