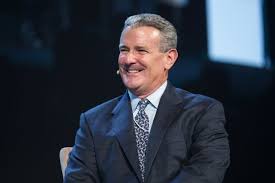 You would be smiling too if your company just slipped you millions in help.

The move was made one day before the announcement and it put Chief Executive Officer Al Walker in line to get millions more in compensation if he leaves the company.

The board also removed a provision that would have reduced Walker’s potential payout because he has not turned 65. An April 17 regulatory filing revealed the board promised to cover excise taxes on golden parachute payments to the company’s top executives.

The changes to his severance terms could raise his exit package by $2.5 million to $66.8 million. It includes equity awards worth nearly $34 million and $21.4 million in accumulated pension payments.

President Robert Gwin, Chief Financial Officer Ben Fink and three executive vice presidents will get 200 percent of their target bonuses for 2019 before the deal with Chevron is finalized.