From power of the print to electrical power

Electric cars are slowly displacing gasoline and diesel in the U.S. 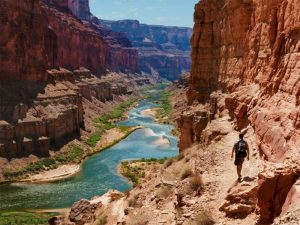 While dry conditions are spreading in western Oklahoma, some western states have reached a deal on sharing water from the Colorado River.

DROUGHT DEAL ADVANCES: After more than three years of work on a major water-sharing deal for the drought-stricken Colorado River, the seven basin states that depend on the river and the Bureau of Reclamation formally signed the plan Tuesday during a meeting in Phoenix and sent it to Congress for approval. The deal could begin bolstering water levels at the river’s two main reservoirs as soon as next year if it wins lawmakers’ approval.

The sign-off was a major victory for Reclamation Commissioner Brenda Burman, who issued a controversial threat to intervene if states didn’t approve the deal by Tuesday — a threat she called off at the eleventh hour. “Today is a really important day in the history of the Colorado River,” she told reporters.

But will it be in the end? House and Senate committees have hearings on the deal scheduled next week, but whether the deal will gain sufficient backing remains an open question, especially as the powerful southern California agricultural district that opposed the plan because it didn’t address the Salton Sea’s environmental problems remains bitter about having been cut out of the deal. “As champagne is being prepared for debauched self-congratulation in Phoenix, remember this: The [Imperial Irrigation District] is the elephant in the room on the Colorado River as we move forward. And like the elephant, our memory and rage is long,” a veteran district board membersaid Tuesday.