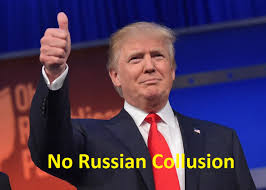 The response of Oklahomans in the U.S. House and Senate to the report by Special Counsel Robert Mueller was no surprise. They suggested the report that cleared President Trump of any Russian collusion was expected and what they had been professing for the past two years.

“The summary of the Mueller report Attorney General Barr provided to Congress today was clear: there was no evidence of collusion or obstruction of justice—and this was after nearly a two-year investigation with virtually bottomless resources.,” said Sen. Jim Inhofe. “Maybe now the Democrats can stop feeding Russia’s goal of sowing discord and start working with Republicans on behalf of American families.”

“While it’s unfortunate that it took a costly and lengthy investigation to reach this point, Democratic suspicions were finally proven false. There was no collusion between Russia and the Campaign of President Donald Trump,” said Cole. “With completion of the Special Counsel’s incredibly thorough investigation, I hope Democrats will decide to accept the truth of the conclusions and turn their attention and energy toward working on more important issues for the American people. There is no reason for more damaging and divisive distractions that are motivated simply by the desire to condemn President Trump.”

“As I expected, Special Counsel Robert Mueller found no evidence of conspiracy or collusion between Russia and the Trump campaign. Tens of millions of taxpayer dollars and nearly two years of time were wasted in pursuit of this pointless investigation,” said Rep. Hern.  “I think many of my colleagues need to apologize for the hateful and baseless accusations they’ve made against the President, looking to divide our country and discredit the accomplishments of President Trump’s administration. I look forward to the speedy release of the full report to Congress and the public. The American people deserve to see the full results of this massive waste of time and money. In the meantime, Congress can return our focus to the real issues in our country, eliminating regulations on job creators, putting Americans back to work, empowering our people to earn better wages and realize their American Dream.”

Oklahoma’s only Democrat in the House, Rep. Kendra Horn did not issue any statement after the announcement was made Sunday.