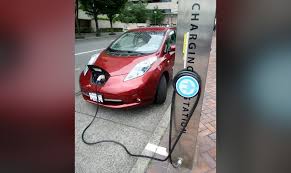 Think you want to buy an electric car? The lack of EV chargers might make you reconsider, especially out here in what the east and west coast people call “flyover country.”

Consider the article from EcoWatch.

A driver planning to make the trek from Denver to Salt Lake City can look forward to an eight-hour trip across some of the most beautiful parts of the country, long stretches with nary a town in sight. The fastest route would take her along I-80 through southern Wyoming. For 300 miles between Laramie and Evanston, she would see, according to a rough estimate, no fewer than 40 gas stations where she could fuel up her car. But if she were driving an electric vehicle, she would see just four charging stations where she could recharge her battery.

The same holds true across the country. Gas stations outnumber public charging stations by around seven to one. It’s no wonder people get so nervous about driving an electric car.

Numerous studies have shown that consumers steer clear of EVs because they worry about the lack of charging stations. Studies also show that consumers are more likely to buy an electric car when they see stations around town. While fears about range anxiety are largely unfounded — even the cheapest EVs sport enough range to serve nearly all of a driver’s needs — the paucity of charging stations is a real concern on longer trips, and it is deterring consumers from going all-electric.

To be clear, it’s not just consumers who want to see more chargers. Charging stations are a boon to automakers, who want to sell electric cars, as well as to power utilities, who want to sell more electricity. Some utilities and automakers are investing huge sums into setting up charging stations — including Volkswagen’s commitment to spend $2 billion on EV charging infrastructure as part of their settlement over the diesel emissions scandal. But by and large, automakers and power companies are not putting a lot of money towards charging infrastructure.

Power utilities have a big interest in EVs. Despite continued economic growth, demand for electricity has stayed flat over the last decade, as businesses slash energy use and consumers switch to more power-thrifty appliances — LED light bulbs, flat-screen TVs, high-efficiency washers and dryers. EVs could drive up the demand for electricity, throwing a lifeline to power utilities. And yet, these companies largely aren’t building charging stations.

“For power utilities, the question is whether they see it as something that’s actually in their bailiwick or not,” Sifuentes said. Policymakers have not directed utilities to build out EV infrastructure, and with so few electric cars on the road, utilities are unlikely to take it upon themselves to start building charging stations.

“The problem is that the charging infrastructure doesn’t have a viable business model yet,” said David Greene, a professor of civil and environmental engineering at the University of Tennessee. “Although, there are some companies who are working on it really hard.”

Private firms like EvBox and ChargePoint are looking to radically expand the number of available charging stations, but these plans depend on exponential growth in the sale of EVs. ChargePoint is looking to add 2.5 million charging stations to its global network of just 50,000, a goal it said is based on a “conservative view” of future EV sales. EvBox, meanwhile, is aiming for 1 million new charging stations. A spokesperson noted this target is “at least partly dependent on the number of electric vehicles on the road,” though he was similarly bullish on the growth of EVs. Analysts expect EV sales to increase dramatically in the coming years, though major roadblocks stand in the way of future adoption.

Even if EV sales take off and charging stations proliferate, barriers will remain. Making EVs more viable means installing not just more chargers, but more fast chargers that allow drivers to take long journeys. The difference between a fast charger and a slow charger is the difference between a family stopping for coffee while they refuel their car and a family stopping overnight.

“It’s 180 miles from Knoxville to Nashville. Supposedly there’s a [direct current] fast charger at a Cracker Barrel in Cookville, which is almost exactly halfway, but it almost never works,” Greene said. “The fact that the range is limited and the recharging time can be quite long if one does not have access to fast charging, that’s another problem.”

There is also the fact that the technology isn’t standardized. Different cars use different plugs. Ford and GM use one kind. Tesla uses another. Fast charging requires a different kind altogether. So, while charging stations dot the country, not every station meets every driver’s needs. Until manufacturers arrive at an industry standard — or policymakers mandate that standard —
“charging stations are going to need to have two or three different types of plugs, and people will need to be able to charge at different speeds because their car might not have a supercharger,” Sifuentes said.

Sifuentes believes that policymakers have a key role to play in building out charging stations. “They have to actually put in place laws and incentives that encourage the development of the necessary infrastructure, and I think that takes place in two ways,” he said. “One, encouraging utilities to do that. But also, I think we can’t ignore the role that public transit plays here.”

New York City, he said, has pledged to switch to all-electric buses by 2040. “That means they’re going to have to put some serious charging infrastructure in place,” Sifuentes said. “If there’s a charging location that has to be put in because buses need to charge there but that’s available for private use as well, great.”

In addition to building public charging infrastructure, governments can also encourage the development of private charging infrastructure. Policymakers in Iowa and Austin, Texas, for example, are working to lower barriers to setting up charging stations, allowing private firms, as opposed to power utilities, to resell electricity. “I think the other role that policymakers have to play here is they have to actually put in place laws and incentives that encourage the development of the necessary infrastructure,” Sifuentes said.

In Norway, where EVs account for around a third of all new car sales, the government has gone a step further. The government is installing a fast charging station every 30 miles on main roads. EV drivers can get free charging at public stations in addition to free parking and free access to toll roads. Sifuentes said these kinds of policies are needed to spur the growth of EVs and support the installation of EV charging stations.

“We’re absolutely on the tipping point,” Sifeuntes said. “The more that we see EVs rolling out, the more and more it’s going to look like the right move to be putting this infrastructure in place.”