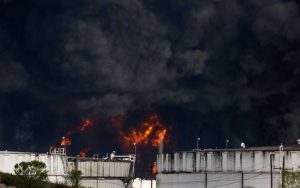 The massive petrochemical fire near Houston had burned itself out as of Wednesday morning as investigators tried to determine what caused the blaze that burned for more than 3 days.

No one was injured in the damaging fire before it was finally extinguished.

One report indicated a worker at the Intercontinental Terminals Co. at Deer Park first noticed smoke rising from a chemical storage tank and within a half hour “it was roaring up.”

He suspected parts of the tank might have overheated and a safety mechanism that can turn over the tanks might have not been enough to prevent the fire.