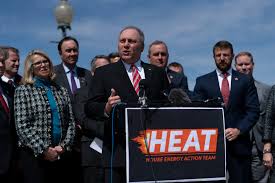 Two Oklahoma Congressmen have joined the effort of Republicans  in the U.S. House to counter the Green New Deal pushed by Democrats.

Rep. Kevin Hern of Tulsa in the 1st district and Rep. Markwayne Mullin in the 2nd district are part of the House Energy Action Team or HEAT.

About 20 GOP members of the House joined Whipe Steve Scalise of Louisiana in creating the effort.  They describe their coalition as supporting the development, deployment and efficient use of “all of the above” energy resources.

Rep. Hern, Mullin and the others say it’s an attempt to counteract what they label as “extreme and economically devastating proposals like the Green New Deal.”

Congressman Jody Hice (R-GA) announced that HEAT’s first action item will be a discharge petition to bring the Green New Deal legislation to the floor for a vote, putting House Democrats on record with the $93 trillion proposal.

After the Senate voted 0-57 this past week (with 43 Senators voting “present”), the coalition said it will be a telling vote for the 90+ Democratic cosponsors of the Green New Deal in the House.