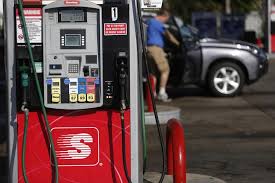 Gasoline prices continue their upward march in Oklahoma with a new statewide average of $2.30 per gallon this week, an increase of 7 cents.

AAA Oklahoma reports the state’s lowest prices continue to be in southern and southeastern Oklahoma. But it’s also the site for the highest price of $2.48 a gallon in  Holdenville, the county seat of Hughes County. Woodward’s average is $2.45 a gallon.

Prices in Tulsa shot up 9 cents over the past week reaching a new average of $2.34 while Lawton’s average of $2.17 rose only two cents per gallon. The average in Oklahoma City increased 8 cents to reach $2.27.

Oklahoma’s average compares to $2.48 for the nation.  It is also the highest average in the region, with the exception of New Mexico which has the same average. Prices in Kansas average $2.26 while Texas has an average of $2.23 per gallon. Missouri’s average is $2.21 while Arkansas has an average price of $2.24 a gallon. Colorado prices are at $2.26.