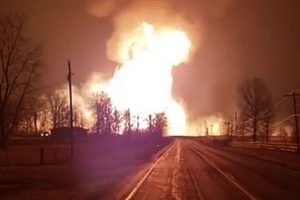 An investigation is underway into what caused a fiery rupture of a Panhandle Eastern pipeline on Sunday in Missouri. No one was injured according to Energy Transfer LP but the blast limited capacity for Panhandle Eastern.

The rupture happened north of Mexico, Missouri which is about 120 miles from St Louis. Power to several homes was interrupted according to the Audrain County Sheriff’s office.

The blast happened downstream from the Centralia Compressor Station and the resulting fire was extinguished about 40 minutes later.