Encana to layoff nearly 270 workers after acquisition of Newfield

Even barbers are getting rich in the Permian Basin 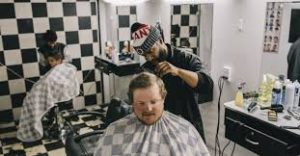 We’ve all heard and read stories of how wealthy workers have become because of the oil and gas boom in West Texas.  But $180,000 a year for cutting hair?

It’s the story reported recently by the Wall Street Journal and is a must read:

From The Wall Street Journal

West Texas has seen its share of oil booms, but the people there say this one is unlike any they’ve seen.

Driven by shale drilling, a gusher of crude production has transformed the Permian Basin into America’s hottest oilfield, turning what was a remote stretch of towns spread among mesquite trees and scrubland into an industrial zone, seemingly overnight.

Fortunes are being made in this fracking-related gold rush, and money and workers are flooding in. But many necessities in the area now cost a small fortune, creating opportunities for businesses selling everything from dipping tobacco to sand for fracking. It can be hard to get a haircut, grab a plate of good Texas barbecue, or find a table at a popular bar, because demand outstrips supply. Housing is scarce and hotel room prices sometimes rival those of New York City at more than $500 a night. 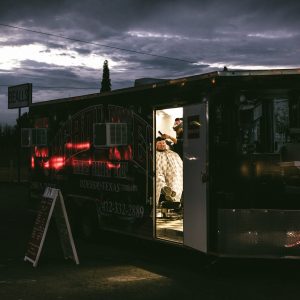 There are more than 300 metropolitan areas across the U.S. with fewer than 1 million people. The Midland-Odessa job market, in the heart of the fracking boom, was the hottest of all of them last year, according to a Wall Street Journal analysis. Among those metro areas, Midland had the fastest job and labor-force growth, and one of the lowest unemployment rates, a monthly average of 2.3% in 2018.

Oil prices have fallen about 25% since October to around $57 a barrel. But West Texas residents are hopeful the boom won’t go bust soon because companies have pumped billions into building out the oilfield, and drilling is not expected to peak for years.

Pete McGarity opened Headlines Barber Shop in Odessa in 1998 and has ridden the boom-bust cycle before. This time around he decided to capitalize on it. 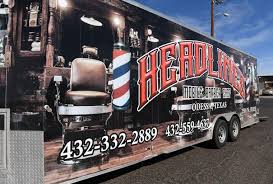 In 2017, Mr. McGarity spent about $25,000 to retrofit a trailer into a custom, mobile barber shop. That October, he drove it about an hour west to Pecos, Texas, and parked in front of the town’s only grocery store, hoping to catch oil field workers between shifts. It was an instant success.

“It was crazy, it went berserk,” says Mr. McGarity, 48. “I’d show up around one o’clock and we’d cut until after midnight.”

These days Mr. McGarity sends the trailer to Pecos, which is closer to the oilfields, six days a week with five barbers, who cut hair all day long. A cut costs as much as $40, more than the $25 he charged before the boom. There is usually a long waiting list, but patrons can cut the line if they pay $60, or $75 with a shave, a popular option with oil workers.

“It is flooded with oilfield workers galore, and these guys tip well,” he says.

Mr. McGarity’s barbers are raking it in. Those who venture to Pecos can make anywhere from $130,000 to $180,000 per year, he said. He is considering investing in additional trailers to send to farther-flung towns in the oil patch and says the additional revenue may allow him to retire soon. If there’s a bust, he’ll just store the mobile shops until things come back, he adds.

BY THE NUMBERS: HEADLINES BARBER SHOP

If you’re hoping to get some brisket at Pody’s BBQ in Pecos, you’d better show up early. During the week, there are usually 30 or more oil field workers lined up outside the restaurant before it opens at 11 a.m., an unusual sight for the small town before the boom.

Israel Campos says he has doubled his sales since starting the restaurant in 2012. Mr. Campos, 44 years old, says he is lucky his staff is family members, because many restaurants in the area struggle to keep workers, who are lured away by higher paying oil industry jobs.

The oil hands waiting in line will often order for their co-workers, sometimes 10 plates at a time, according to Mr. Campos. Company men frequently call ahead with larger orders they bring to drilling rigs or even fly out on private planes, he says.

“We sell out daily and we hardly see any locals because the oil field comes and buys us out,” Mr. Campos says. “Locals tell me ‘I won’t even attempt to come to your place,’ and I’m like, ‘sorry dude.’”

Mr. Campos grew up in Pecos, whose population neared 10,000 in 2017, according to the Census. He was recently elected Reeves County commissioner and says that if a bust comes, it just means locals will be able to eat at the restaurant again.

BY THE NUMBERS: A TYPICAL DAY AT PODY’S

No Seats at the Bar

When oil field workers want to blow off steam, many head to one of the most popular bars in Odessa, The Shack in the Back. Bar owner April Williams says patrons appreciate the Shack’s laid-back atmosphere and outdoor patio centered on a stretch of grass, uncommon in the area.

It’s so popular that oil companies pay $6,000 or more for tables while the bar is in season, about seven months a year. The bar is only open Wednesday nights, and is otherwise closed for weddings or corporate parties, so the fee works out to around 28 nights. Companies get a guaranteed picnic table on the patio and some employees and guests don’t have to pay the $10 cover. Reserving a table for just one evening costs as much as $100.

The tables are already booked for next season, says Ms. Williams, who opened the bar 15 years ago. It gets slower when oil prices are down, she adds, but she’s not that worried about a bust.

BY THE NUMBERS: A TYPICAL WEDNESDAY AT THE SHACK

The frenzy of money and workers has downsides. Chief among them is a paucity of affordable housing. There’s such a shortage that school districts in the Permian basin are considering building rental homes for teachers as rising housing costs make it increasingly difficult to recruit, even as public school enrollment in the Midland region has jumped 9% in five years, according to the Texas Education Agency.

The median home value in Midland, Texas was $256,600 as of January, according to Zillow Group Inc., up about 30% since oil dipped below $30 a barrel in 2016. Meanwhile, oil and gas workers earning top dollar have scooped up much of the available rental housing.

In Fort Stockton, about two hours southwest of Midland, the boom has exacerbated the already difficult problem of finding teachers willing to move out to the remote town of about 8,000, where new hires stand to earn $42,500. In response, the local school district is looking to build at least six duplexes to rent to teachers. The district already owns land where the homes could be located.

“If we have some keys we can dangle in front of them, it takes one thing off their plate if someone’s trying to move,” says Ralph Traynham, superintendent of the Fort Stockton Independent School District. The project is expected to cost about $2.8 million, Mr. Traynham said.

Not Your Father’s Man Camp

Many oil workers live in temporary housing complexes, known as man-camps. Such camps have been a mainstay of oil booms over the last decade, offering frequently spartan, dormitory-like housing for influxes of temporary workers.

But as the man-camp game has become more competitive, some have become more upscale in a bid to win business. Target Lodging is the largest operator of man camps in the Permian basin. It’s invested hundreds of millions in the region and has gone from 80 beds in 2012 to 8,500 beds currently.

Chief Executive Brad Archer says Target’s facilities, which it calls lodges or communities, are vastly upgraded from the man-camps of years past. They include weight rooms, memory foam mattresses, executive chefs and even swimming pools.

“It’s definitely not my dad or your dad’s oil field,” Mr. Archer says.

Mr. Archer says that the influx of workers to the region, some of whom can make six figures, are requiring creature comforts one wouldn’t typically associate with the oil patch. Target’s customers are oil companies who sign up for long-term contracts to house their workers. The company declined to disclose its rates, but analysts say higher-end man camps can charge $1,500 to $3,000 per month, depending on food and other services included.

Target offers rotating menus from chefs Mr. Archer says have worked in top tier restaurants around the world. At the lodge in Pecos, a worker can eat salmon and fresh vegetables in the dining hall or order wood-oven pizza and watch a football game at the “Frac Shack,” a sort-of sports bar, sans alcohol.

BY THE NUMBERS: FOOD SERVED BY TARGET IN THE PERMIAN IN 2017