Encana to cut rigs in the STACK 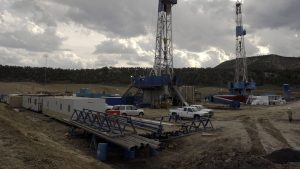 Alta Mesa Resources isn’t the only energy firm to implement some changes in operations in Oklahoma’s STACK. Word came this week that the Canadian energy company Encana intends to cut the number of rigs in operation but maintain or even increase productivity.
It’s dropping its total rigs from 10 to four during the time period. Some of the drilling sites had been acquired from Newfield Energy in February.
In turn, Encana CEO Doug Suttles indicated his firm will not cut drilling efforts in the Permian and the Montney. He also expects production in the STACK to keep up with the production out of the Montney and the Permian Basins.

“Encana’s track record in the Montney and Permian can be instantly applied to the Anadarko,” Suttles told analysts during a recent conference call.

Suttles explained the drop in the number of rigs in the STACK doesn’t mean there will be any less drilling. Instead, the company will utilize a “cube development” which is used in the Permian and Montney plays.

The cube development employs several rigs drilling from one large pad and uses different fracturing spreads to stimulate the wells simultaneously. Encana expects the well count to climb between six and 10 for each pad with the new system.

The practice should also result in cost savings for drilling and completion costs.

The cubed development happens in the drill hole where 3D optimizing for spacing and stacking is employed. The program is also used in completion plans to increase well production.

Company management anticipates it will save $1 million a well by mid-2019 by resorting to self-sourcing sand and chemicals. Encana intends to reduce spending enough this year to create a supply of cash to be returned to investors in dividends and buyback programs.