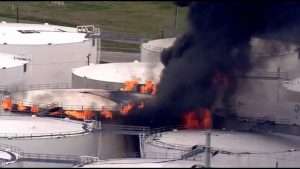 Tank fires burned all day on Sunday and into Monday morning at a bulk liquid storage facility managed by Intercontinental Terminal companies near petrochemical complexes south of Houston.

It was before 11 on Sunday morning when the naphtha tank caught fire and it spread to a Xylene tank late Sunday night.

The Harris County Judge activated an emergency shelter, though residents of Deer Park had been told to remain in their homes and businesses — and those outdoors are asked to seek shelter — as part of the City of Deer Park’s “Shelter In Place” order that had been in effect since midday Sunday.

No injuries have been reported, all employees are accounted for and there are no calls for evacuations.

First reports of air contamination say levels near the plant are not elevated.

ITC operates two terminals in the Houston area; this facility has been shut down.

On-site crews have been using foam and water for fire control, but all efforts are aimed at keeping the fire from spreading any more.