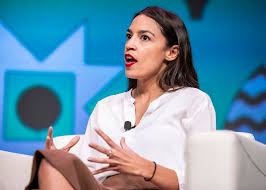 It wasn’t out of the ordinary for New York Democratic Congresswoman Alexandria Ocasio-Cortez to draw an overflow crowd when she during the weekend in Austin, Texas. After all, Austin is the city that is proud of its liberalism and sells tee shirts “Keep Austin Weird.”

While Oklahoma congressman Markwayne Mullin, an avowed Republican from eastern Oklahoma maintains AOC’s “Green New Deal” is all about socialism and nothing about the environment, AOC defended her socialistic-leaning plans at the Austin appearance.

She denied her plans will necessitate a loss for one sector of the nation to allow for the gain of another.

Here’s how the Austin American-Statesman reported her speech.

U.S. Rep. Alexandria Ocasio-Cortez, D-New York, who required two overflow rooms for her appearance at South by Southwest Saturday, is, at, 29, the youngest woman ever to serve in Congress. If she were not, and if she were to be the constitutionally requisite age of 35 by the time the next president is sworn in, this women who is already known by her initials — AOC — would undoubtedly be the source of considerable excitement as a potential candidate for the Democratic nomination for president in 2020.

And if she were, her appearance in Austin this weekend might have marked the moment when she found her running mate — Bill Nye the Science Guy.

As Briahna Gray, senior politics editor with The Intercept, said that there was time for one last question before she drew the session, which was running over its hour allotment, to a close, there were whoops of excitement, including from Ocasio-Cortez herself, as the recognizable bow-tied figure of America’s most famous science educator came to the mic.

“Wow, greetings every one,” Nye said. “Here is what I think is going on.”

“As you know, I’m a white guy. I belong to two unions,” said Nye. “But I think the problem from both sides is fear.”

“People of my ancestry are afraid of having to pay for everything as immigrants come into this country,” Nye said.

“So do you have a plan to work with people in Congress who are afraid?” Nye asked. “I think that’s what’s happening with many of the conservatives, especially when it comes to climate change.”

And, Nye added, “Article 1, Section 8, Clause 8 of the U.S. Constitution refers to the `progress of science and useful arts.′ So when we address climate change, we are going to have clean water, access to the internet and renewable electricity for everyone. Let’s go!”

“Dismantling fear is dimantling a zero sum mentality,” said Ocasio-Cortez, who said that means the “rejection outright of the logic that says that someone else’s gain necessitates my loss and that my gain must come at the cost of another person.”

“We are increasing our capacities for productivity so we can give without a take,” said Ocasio-Cortez, a democratic socialist who believes it is time to rethink “this idea of how you are going to pay for it, this idea that there is a person that pays for it, reviewing progress as a cost instead of as an investment. The difference between a cost and an investment is that an investment yields returns.”

Ocasio-Cortez, whose district includes parts of the Bronx and Queens, captured the popular imagination when she, seemingly out of nowhere, upended U.S. Rep. Joe Crowley, a Queens Democrat who was thought to be a potential future speaker of the House, in the 2018 Democratic primary. She hasn’t had a quiet moment since, becoming a leading progressive voice, an architect of the Green New Deal, a source of concern for more moderate Democrats and a favorite target of Republicans and conservative media, who, whatever else, pay a lot of attention to her.

That will change, she said, “when we raucously participate in government in the off-season in our own self governance.”

“We’ve got to call our congressman as much as we call our local Chinese spot for takeout,” she said.

And, she said, “Courage is self-propagating. Courage begets courage.”

“The first person who stands up has to encounter the most amount of fear and discomfort,” said Ocasio-Cortez. “But once that one person stands up, it becomes immensely easier for the second and the third and the fourth until it doesn’t take any courage to stand up for something.”