Who will handle energy legislation in Oklahoma House? 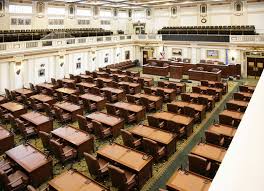 With the Oklahoma legislature underway after Gov. Kevin Stitt delivered his first State of the State address on Monday, any energy-related legislation will first have to work its way through committees.

In the State House, the Energy and Natural Resources committee is chaired by Rep. Terry O’Donnell and the vice chair is Rep. Trey Caldwell.