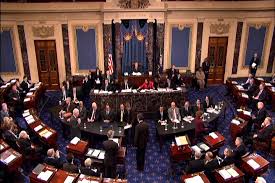 When the U.S. Senate passed what some call  the most sweeping conservation legislation in a decade this week, the vote was overwhelming—92 to 8.  And Oklahoma Senators Jim Inhofe and James Lankford were among the eight who opposed the measure.

They were joined by Senators Cruz of Texas, Johnson of Wisconsin, Lee of Utah, Paul of Kentucky, Sasse of Nebraska and Toomey of Pennsylvania.

Sen. Lankford repeated his opposition complaining that the measure did not to address billions in backlogged maintenance at federal lands including $100 million at Yellowstone National Park.

“I opposed the Lands Package partly because it fails to address maintenance backlogs on public land. My amdt to allow LWCF to fund maintenance failed last week. This bill permanently authorizes adding new land w/o a plan for caring for existing land,” said the Senator in a tweet.

But the measure has significant impact in numerous states according to the following story from the Washington Post.

“The Senate on Tuesday passed the most sweeping conservation legislation in a decade, protecting millions of acres of land and hundreds of miles of wild rivers across the country and establishing four new national monuments honoring heroes including Civil War soldiers and a civil rights icon.

The 662-page measure, which passed 92 to 8, represented an old-fashioned approach to dealmaking that has largely disappeared on Capitol Hill. Senators from across the ideological spectrum celebrated home-state gains and congratulated each other for bridging the partisan divide.

“It touches every state, features the input of a wide coalition of our colleagues, and has earned the support of a broad, diverse coalition of many advocates for public lands, economic development and conservation,” said Senate Majority Leader Mitch McConnell (R-Ky.).

It’s a paradoxical win for conservation at a time when President Trump has promoted development on public lands and scaled back safeguards established by his predecessors.

The bill, which the Congressional Budget Office projects would save taxpayers $9 million, enjoys broad support in the House. The lower chamber is poised to take it up after the mid-February recess, and White House officials have indicated privately that the president will sign it.

The measure protects 1.3 million acres as wilderness, the nation’s most stringent protection, which prohibits even roads and motorized vehicles. It permanently withdraws more than 370,000 acres of land from mining around two national parks, including Yellowstone, and permanently authorizes a program to spend offshore-drilling revenue on conservation efforts. The package is crammed full of provisions for nearly every senator who cast a vote Tuesday. Sen. Martin Heinrich (D-N.M.) lauded the fact that it will create 273,000 acres of wilderness in his state, most of it within the boundaries of two national monuments that Trump threatened to shrink. Senate Energy and Natural Resources Committee Chairwoman Lisa Murkowski (R-Alaska), who co-authored the bill, inserted a provision that allows native Alaskans who served in Vietnam to apply for a land allotment in their home state.

“We have also worked for months on a bipartisan, bicameral basis to truly negotiate every single word in this bill — literally down to one one-tenth of a mile for [a] certain designation,” Murkowski said as she urged her colleagues to vote for the bill on Monday.

House Natural Resources Committee Chairman Raúl M Grijalva (D-Ariz.) hailed it as “an old-school green deal,” saying he and the top Republican on his panel, Rep. Rob Bishop (Utah) “are happy to work together to get this across the finish line.”

Sen. Maria Cantwell (D-Wash.), a lead negotiator on the bill, said the fact that the legislation protects so much of the nation’s prized properties won a broad constituency. “There’s some corners that tried to demonize access to public lands as — ‘oh that’s just some environmentalists and that’s it,’” she said in an interview. “And that’s not it. It’s way bigger than that.”

The legislation establishes four new monuments, including the Mississippi home of civil rights activists Medgar and Myrlie Evers and the Mill Springs Battlefield in Kentucky, home to the decisive first Union victory in the Civil War.

John Gilroy, who directs U.S. public lands conservation at the Pew Charitable Trusts, said in an interview that the package’s more than 100 provisions arose from negotiations on the local level, which provided enough momentum to overcome the typical gridlock that has come to define Capitol Hill.

“What we saw all the way through was a sincere effort to get to yes on a lot of pieces that had local support, bipartisan support and support across the two bodies,” Gilroy said. “It’s been years in the works. These are not proposals that were thought up just last week, somewhere in Washington D.C.”

Perhaps the most significant change the legislation would make is permanently authorizing a federal program that funnels offshore drilling revenue to conserve a spread of sites that includes major national parks and wildlife preserves, as well as local baseball diamonds and basketball courts. Authorization for the popular program, the Land and Water Conservation Fund (LWCF), lapsed months ago due to the partial government shutdown and other disputes. Liberals like the fact that the money allows agencies to set aside land for wildlife habitat. Conservatives like the fact that taxpayers don’t have to foot the bill for it.

Congress is now set to reauthorize the fund in perpetuity, though it will not make its spending mandatory. Congressional funding for the program has “fluctuated widely” since its inception in 1965, according to a 2018 Congressional Research Service report. Less than half of the $40 billion that has piled up in the fund during its five decades of existence has been spent by Congress on conservation efforts.

“We wish we would have gotten it, but it’s still a big win,” said Jonathan Asher, a government relations manager at the Wilderness Society who worked at the Environmental Protection Agency during the Obama administration. “There are plenty of members of Congress that want mandatory funding, but it’s a longer, heavier lift.”

The bill reauthorizes and funds the Neotropical Migratory Bird Conservation Act through 2022, which provides habitat protection for more than 380 bird species, and codifies a signature program of President Barack Obama’s. That program, the Every Kid Outdoors Act, allows U.S. fourth-graders and their families to visit national parks free.

The measure also expands the boundaries of more than a half-dozen national parks and adds three units, including two Civil War sites in Kentucky, the Mill Springs Battlefield and Camp Nelson.

The package adds acreage to Death Valley and Joshua Tree national parks while protecting 350,000 acres of public lands between Mojave National Preserve and Death Valley, increasing the connectivity of the three sites. “This is one of the missing pieces in the landscape connection puzzle in the California desert,” said David Lamfrom, director of California Desert and Wildlife Programs at the National Parks Conservation Association.

The bill would also be a boon for another constituency — hunters and anglers.

Bow hunters would be allowed to bring their weapons through national parks when trying to reach areas where it is legal to hunt. More important, it makes all federal lands open to hunting, fishing, and recreational shooting unless otherwise specified.

Jesse Deubel, executive director of the New Mexico Wildlife Federation, said in an interview that expanding wilderness in his state will be a powerful lure for hunters seeking bighorn sheep, mule deer, quail and other animals. “People will travel to these places to pursue game in this wild, untamed habitat.”

The public lands package would also protect nearly 620 miles of rivers across seven states from damming and other development, often delegating management of the waterways to local authorities. It includes safeguards for a variety of rivers — everywhere from the tributaries for the wild Rogue River in Oregon, known for its vibrant salmon populations, to the once heavily polluted Nashua River that flows from Massachusetts to New Hampshire and is popular with kayakers.

In many cases, locals have been asking Washington for years for these protections to bolster tourism.

Montana’s entire congressional delegation — two Republicans and one Democrat — pressed for the permanent withdrawal of mineral rights of roughly 30,000 acres of U.S. Forest Service lands near Yellowstone National Park. Another provision in the bill would keep lands in Washington’s Upper Methow Valley from mineral entry and exploration, to protect North Cascades National Park.

Colin Davis, owner of Chico Hot Springs resort in Montana’s Paradise Valley, said that he and other local business owners have spent the last four years working to eliminate the prospect of gold mining on Yellowstone’s doorstep. Companies have eyed two separate sites, both near Davis’s 120-year-old historic property.

“To have industrial mining in both those places, on a scale that would make it financially viable, is really threatening to our economy,” said Davis, who employs 180 people. “This is the heart of the last best place. … This community has come together over this.”

A series of compromises won over advocacy groups representing hunters and anglers, conservationists, geologists, Native Americans, along with local officeholders and chambers of commerce. Utah’s Emery County, for example, blessed the designation of 661,000 acres of wilderness, 300,000 acres for a national recreation area and 63 miles of protection on the Green River in exchange for more than 75,000 acres of land that it can develop elsewhere.

Sen. Mike Lee (R-Utah) emerged as the legislation’s most vocal opponent, decrying the restrictions that accompany any new wilderness and the possibility that the bill will make it easier for the federal government to acquire private land.

“This bill perpetuates a terrible standard for federal land policy in the West, and particularly for Utah,” he said.

Lee outlined his opposition in the Deseret News a day after junior Sen. Mitt Romney (R) of Utah defended the package in the same paper. “We can conserve wildlife, protect historic sites, maintain access and preserve Utah’s public lands in a way that reflects the priorities of rural Utahns,” Romney wrote. “This is the future our public lands need and deserve.”

In an interview, Heinrich noted that Republican and Democratic supporters of the bill stuck together to defeat hostile amendments such as Lee’s, which could have unraveled the deal.

“That’s something you used to see all the time,” he said. “That’s been much more rare in recent years.”

The package designates several other protected areas in Utah, including the 850-acre Jurassic National Monument and the much more vast San Rafael Swell Recreation Area. Scott Groene, executive director of the Southern Utah Wilderness Alliance, said the wilderness designations will keep motorized vehicle use at bay in Desolation and Labyrinth Canyons, part of the dramatic red rock landscape that defines the state.

But in a sign of the trade-offs activists made in the legislation, Groene noted that only half of the river running through these canyons will be protected since only Emery County endorsed the bill. “We’ll have to come back and protect the other half of the river later.””