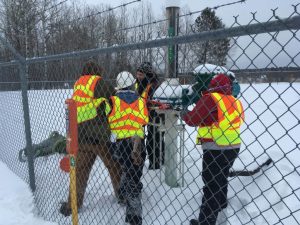 Four environmental activists who attempted to shut down an Enbridge pipeline near Grand Rapids, Minnesota on Monday ended up in handcuffs.

One of the four was Allyson Polman of Denton, Texas. The four called themselves the “Four Necessity Valve Turners” and are connected with the Catholic Worker movement. They stated their actions were necessary to address what they felt was an urgent threat posed by climate change.

“The recent scientific study on climate change presented to the UN indicates that the threat of irreversible damage and destruction to our planet is imminent,” the activists wrote on their website. “Therefore, having exhausted all legal and political avenues, and having found those avenues lethally inadequate either to curb our dependency on fossil fuels or to stop its expansion, we find it necessary to take this direct action of turning off the flow of this poisonous tar sands oil.” 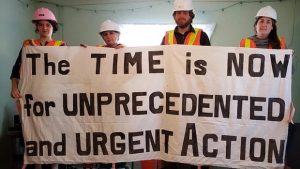 After a period of prayer, they called Enbridge to inform them they would be turning off the company’s line 4 pipeline, prompting Enbridge to shut it off remotely. The activists were taken into custody by Itasca County sheriff’s deputies around 1:30 p.m.