Sale of shares by OGE directors reported to SEC 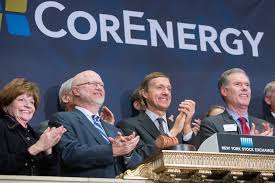 The Company also announced a fourth quarter 2018 dividend of 75 cents a share which was in line with the previous 13 quarterly dividends.

In December, the firm sold its Portland Terminal and its remaining interest in the Joliet Terminal  to Zenith Energy in a $61 million agreement.

“CorEnergy entered 2019 a different company than it began 2018, having sold the Portland Terminal to our tenant, an asset which returned rates in the mid-teens since its purchase in January 2014,” said CorEnergy President, Chairman and CEO Dave Schulte.

Grand Isle Gathering System: On October 18, 2018, the parent company of the tenant of the GIGS, EGC, completed its previously announced acquisition by the privately-held Gulf of Mexico operator, Cox Oil, for approximately $332 million. The tenant continues to utilize the system and make timely rent payments.

Pinedale Liquids Gathering System: UPL made strides to strengthen its balance sheet in 2018 and refocused its drilling plan on vertical wells, following mixed results from horizontal well testing. Utilization of the Pinedale LGS generated $4.3 million of variable rent revenue in 2018, despite UPL’s financial results being adversely affected by lower realized natural gas prices. CorEnergy intends to utilize excess cash flows such as these to reduce its leverage profile and / or invest in new assets.

MoGas Pipeline: On May 31, 2018, MoGas filed a general rate case before the FERC with a proposed revenue requirement of approximately $20.0 million, annually. The proposed rates went into effect on December 1, 2018, subject to refund upon final ruling. The FERC rate case remains ongoing.

Omega Pipeline: Omega and its third-party consultants are reviewing potential projects, including those for its utility energy services contract (UESC) at Fort Leonard Wood in south-central Missouri. The UESC initiative is expected to last four to five years and will produce incremental earnings.