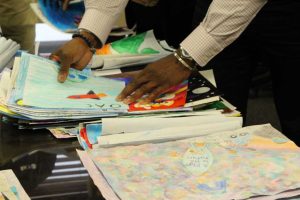 The Oklahoma Aeronautics Commission announced the names of twelve students that placed in the Oklahoma 2019 International Aviation Art Contest.

The state-level Aviation Art Contest, sponsored by the Aeronautics Commission, encourages youth, ages 6 to 17, to reflect on aviation by designing a piece of art based on the year’s chosen theme. This year’s contest theme was “My Dream to Fly.”

In the year 2014, 35 students participated. In 2015, there were 85 entrants.  A total of 132 students contributed in 2016 and the contest yielded 1,112 entries from 73 schools statewide in 2017.  The entries for 2018 accounted for 1,301 entries and 81 schools across the state. In 2019, the agency received 1,220 entries from 86 schools.  This year marks the most participating schools since the Commission began hosting the contest.  The agency attributes their success to their aviation art contest calendar which is mailed to all of the public and private schools across the state.

In the Junior Division, ages 6 to 9, Brecker Tubbs, from Ator Heights Elementary in Owasso, took home first prize. This year’s second-place winner was Chloe Childs from Community Christian School in Norman, while third place went to Haven Herrod, from Latta Public Schools in Ada.  Ruby Nix received an honorable mention from the judges and is a student at Holy Trinity Lutheran School in Edmond.

“Recently we learned from a comprehensive economic impact study of aviation and aerospace activity, that aviation and aerospace has become the second largest industry in the state providing over 206,000 jobs. We must have skilled and competent workers for that industry to remain viable,” director of aeronautics Vic Bird said. “The annual Oklahoma Aviation Art Contest is critical to stimulating aviation interest among young minds.  If we can reach them at the earliest of ages, we can guide them into STEM based education and aviation and aerospace careers.”

“We were greatly pleased with the number of schools and students represented in rural and urban areas.  The Commission is purposefully removed from any of the judging aspects of the contest, and the outcome is based solely on the volunteer judges from the aviation and aerospace community,” said Sandra Shelton, contest organizer and public information officer for the Commission. “We thank every teacher who participated in the contest and encouraged their students to enter, and we hope they will enter again next year.”

First-place winners in each of the three age categories receive $200, while the second-place winners receive $150. A cash prize of $100 is presented to students who place third, and honorable mention will receive $50. In addition to the cash prizes, the winners are also presented with certificates of achievement as well as citations from their respective state senator and state representative during a ceremony at the Oklahoma State Capitol. The top three entries in each age division are forwarded to Washington, D.C., where they compete nationally against other winners from the U.S. for the right to advance to the international competition.