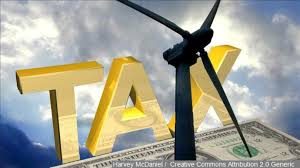 Oklahoma isn’t the only state looking at the wind industry with critical legislation.  Wyoming is too and a fight is brewing over wind and higher taxes.

As OK Energy Today has reported about several bills aimed at the wind industry, in Wyoming, legislators are looking at increasing  the tax on wind.  Wyoming is one of the few sates to tax wind-powered electricity, charging $1-per-megawatt-hour.

Now there’s an effort to increase the tax to $5 per MWh. Republican state Sen. Cale Case is collecting signatures to put it to a vote of the people. If it is approved, Wyoming voters would be the first to tax electricity produced from wind turbines. Case’s effort would put the issue on the ballot in 2020.

He and his supporters claim such a tax would make up for the loss in mineral revenues from the dwindling coal industry. They also contend Wyoming’s low property taxes and a lack of a corporate income tax mean the state’s wind developers would still be competitive with other states.

“We are a mineral-dependent state. We are a carbon-dependent state,” Case said. “Carbon’s going away. We have to figure out to provide schools, roads and jobs to our next generation.”

The wind industry sees it differently…..more as a plan to kill the industry. The $5 a megawatt hour increase is a 500 percent jump in taxes on wind generation. Industry leaders say no other form of electricity generation in Wyoming is taxed. They argue the tax increase would leave them at a disadvantage with other states.

The wind industry also says the tax hike is a threat to proposed developments in Wyoming such as a 3,000-MW Chokecherry and Sierra Madre wind project.

“If we can’t offer a competitively priced product, the project can’t go forward,” said Kara Choquette, a spokeswoman for the Power Co. of Wyoming, the project’s developer. “We think it can under the current environment, but that would be a significant cost to us.”

“Wyoming, and many of our customers, are already experiencing the financial pressures of a changing energy economy,” David Eskelsen, a PacifiCorp spokesman, said in a statement. “We are still very early in the process and will watch this effort closely fully aware this proposal would likely increase the cost of electricity for our customers.”