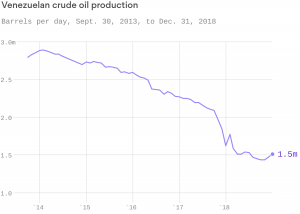 The political and government turmoil in Venezuela has left the country’s oil production in a dismal state. Some could blame it on the socialism-form of government and cite it as another example of a failed system.

Yes, it does affect Oklahoma’s oil and gas industry where production continues to grow.  It also has a direct impact on an Oklahoma firm that made national business headlines when it signed a memorandum of understanding in 2017 with Venezuela’s state-owned oil company Petroleos de Venezuela S.A.

However since the signing, leadership at Horizontal Drilling in Purcell have declined requests from OK Energy Today to comment.

As Axios.com reported Monday, the nation’s oil production has plunged nearly half since 2013.  Some observers in Venezuela think the numbers could be exaggerated but admit the country’s only producing slightly more than 1 million barrels a day.

As for what the future holds? Many believe it will take years for PDVSA, Venezuela’s state-owned oil company to start turning things around.