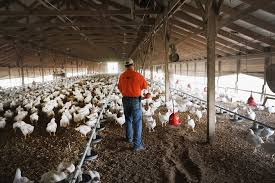 While Oklahoma’s poultry industry has been under fire in recent months for an attempted expansion in the eastern part of the state, one state legislator has filed legislation to protect the industry.

Residents and environmentalists protested the proposed increase of more poultry farms, claiming it would lead to more environmental damage to the Illinois River and other waterways.

But Sen.Ron Sharp, a Republican from Shawnee authored SB 995 to provide small farm exemptions from the Poultry Products Inspection Act. His bill would bring the state’s poultry laws more in line with the standards created and enforced by the U.S. Department of Agriculture. The exemptions would be granted if the small farms recognize certain sanitary standards and if they process their own poultry.
Sharp said if the state fails to update poultry laws, it could jeopardize poultry famers from qualifying for federal funds and contracts.

“Being that agriculture is one of Oklahoma’s top industries, it’s important that we’re continually updating our laws to protect our farmers and ranchers.  This bill will allow smaller poultry operations, that don’t have the funds to cover the regulatory costs, to compete at a local level,” Sharp explained. “A good example of someone who would benefit from this exemption would be a free range, heritage chicken farm that supplies meat to local farm to table restaurants or meat shops, entities that demand a unique product that larger farm operations don’t offer.”

Under the bill, the products can only be sold within the state to certain establishments allowed by the particular exemption they choose.  They would also be exempt from inspection requirements.

The state has attempted to regulate the industry periodically through its history. After 1948, the state Department of Ag took over the inspection of flocks from the Oklahoma Poultry Improvement Association.  Then in 1947, the state legislature passed HB 243 mandating dealers obtain a license from the Department to sell eggs.  In 1957, HB 706 passed requiring egg grading of a certain quality to be sold and matched state standards to federal ones regarding egg size, quality and grade.