Retirement of Halliburton Chairman came amid a federal investigation 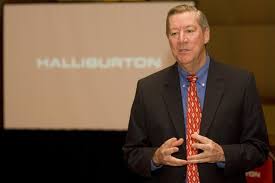 This week’s retirement of Halliburton Co. chairman David Lesar is now believed connected to a federal investigation into a land deal he negotiated with outgoing-Interior Secretary Ryan Zinke.

His retirement wasn’t a surprise since the company knew about it since May 2017.  Reports indicate Lesar is not implicated in the federal probe by the Interior Department’s Office of the Inspector General . Rather, the probe is focused on whether Zinke violated federal ethics standards.

Zinke, through a nonprofit he used to head, negotiated the deal with a development backed in part by Lesar regarding a plot of land the nonprofit owned in Zinke’s hometown of Whitefish, Mont. The deal was first reported by Politico last year.

The OIG has since referred the probe to the Justice Department for potential criminal prosecution. The office, which is closed as part of the ongoing partial government shutdown, didn’t respond to a request for comment Wednesday.

Zinke resigned last month from Interior, and his last day in the post was Wednesday. He has consistently argued that he did nothing wrong.

Shortly after Politico reported on the deal in June 2018, he called the report “fake news.”

“Clearly, I’m not on the board anymore. My wife runs the board,” Zinke said of the nonprofit on Montana radio show Voices of Montana.

“And they make a letter of intent for my wife that, you know what, the community is for this project, the city approves it, it’s a good project for Whitefish, we’ll share some parking lots with you. That’s it,” he said.

“This is exactly what’s wrong with the press, and the president has it right. It’s fake news. It’s knowing, it’s willing, to willingly promulgate fake news.”

Halliburton has refused to comment on the matter, saying it involves Lesar strictly in his personal capacity.