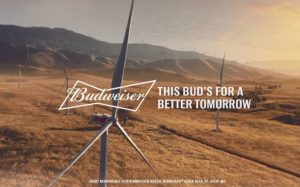 This Bud’s For a Better Tomorrow. (PRNewsfoto/Budweiser)

“Proud to hear that #SuperBowlLIII will be powered by #OK #windenergy! Great to see @AnheuserBusch team up with Enel Green Power & see Enel donate power from their Thunder Ranch wind farm to keep the lights on in @CityofAtlanta this week.”

The tweet also linked to Budweiser’s announcement of its endorsement of wind power from Oklahoma.

Budweiser has released its Super Bowl LIII commercial, bringing its long-term commitment to renewable electricity to the biggest stage of the year.

Last year, Budweiser announced its commitment to be brewed with 100% renewable electricity from wind power, and to celebrate, the King of Beers will showcase the commitment in a commercial entitled “Wind Never Felt Better,” featuring the Budweiser Clydesdales alongside wind turbines – all set to the soundtrack of Bob Dylan’s “Blowin’ in the Wind.” (Budweiser makes note that electricity is one type of energy it uses to brew.)

“Super Bowl is one of the most exciting times of the year for our team and people all over the country. Those who wait for the best commercials all year expect Budweiser to show up big, and we felt there was no better way to show up this year than to talk about our commitment to renewable electricity,” says Ricardo Marques, vice president of marketing core and value brands at Anheuser-Busch, producer of Budweiser. “We are proud to be the first Anheuser-Busch brand and the first major beer brand to be brewed with 100 percent renewable electricity from wind power, and hopefully we can use this moment to inspire others in our pursuit for a more sustainable future.”

To further emphasize the importance of Budweiser’s commitment, the company is donating clean electricity to Atlanta to power the city during the week of Super Bowl. In turn, Bud is offsetting 100% of the electricity used to power Super Bowl week with clean, renewable electricity.

The electricity is coming from Enel Green Power’s (EGP) Thunder Ranch wind farm in Oklahoma. EGP is selling the energy produced by a 152.5 MW portion of the 298 MW project, which began operations in 2017.

In 2017, Anheuser-Busch InBev announced a global commitment to secure 100% of the company’s purchased electricity from renewable sources by 2025. The beer maker joined The Climate Group and CDP’s RE100, a global initiative of influential businesses that are all committed to using 100% renewable electricity. Last January, Budweiser also announced new labeling indicating a beer has been brewed using 100% clean energy.

“As a member of RE100, Anheuser-Busch is committed to sourcing 100 percent renewable electricity. We are thrilled the company is spotlighting this to its consumers during the Super Bowl,” comments Amy Davidsen, executive director of North America for The Climate Group. “It’s exciting to see Budweiser partner with Atlanta to power the city with renewables, too. By working together to drive down emissions, businesses and local governments can accelerate the clean energy transition around the world.”

The creative for Budweiser’s commercial is led by DAVID the agency, based out of Miami.