$4 billion acquisition by Chesapeake Energy to be finalized this week

2018 was a turnaround year for one midstream company

Massive turnaround in earnings for ConocoPhillips in the past year 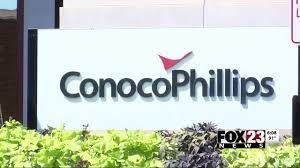 The Houston based company with major operations in Oklahoma said the quarterly earnings were $1.61 a share compared with fourth quarter 2017 earnings of $1.6 billion or $1.32 a share.

The full-year 2018 earnings of $6.3 billion translated into earnings of $5.32 per share. A year earlier, ConocoPhillips reported a net loss of $0.9 billion or 70 cents a share for the full year.

“I am proud of our organization for safely delivering exception results in 2018,” said Ryan Lance, chairman and chief executive officer. “Our accomplishments reflect our clear commitment to a value proposition that is focused on returns and free cash flow generation and that balances investments with returning cash flow to shareholders through price cycles.”