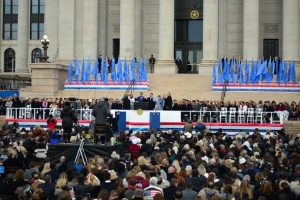 In a career that began with a private practice focusing on energy and real state, Oklahoma Attorney General Mike Hunter is starting his first full term in office.

He was sworn in Monday as the state’s chief legal officer during the inaugural ceremony on the south steps of the State Capitol.

Hunter ran for election after being appointed in 2017 to replace Scott Pruitt as Attorney General. In the November 2018 election, he received more than 64 percent of the vote and carried all 77 counties in the state.

“Serving as the state’s attorney general is the privilege of a lifetime,” Attorney General Hunter said. “I am deeply humbled to be granted this opportunity by Oklahomans to act as their attorney general. I am also blessed to be surrounded by a tremendous team of hardworking, dedicated public servants. My team and I work every day with the best interests of Oklahomans in mind as we work to make our state a safer place to live.

“Over the next four years, we are going to build on our track record of success by continuing to prosecute criminals, advocate for reasonable rates for Oklahoma utility customers, work to reduce the number of individuals addicted to opioids or dying from overdoses and protecting state interests from out of state overreach.